This is the Secondary Title

This week, we have decided to write a discussion-led essay on the polices regarding the global refugee crisis. Remember! It is always a good idea to read extensively about current events. 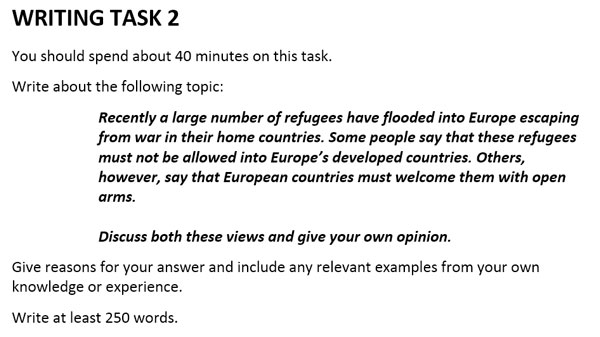 In the wake of the Syrian civil war, thousands of refugees have packed their valuables and headed north seeking asylum in Europe, and this has already turned into a humanitarian crisis at a global scale. However, there has been a great deal of controversy surrounding how these people must be treated.

On the one hand, some may argue that accommodating thousands of refugees — if not millions — would not be feasible. For one thing, European countries cannot afford to accommodate such a large population from an economic perspective. They need shelter, food and decent living facilities. For another, their number is on the increase as their fellow countrymen hear about their success from the media and more and more people are encouraged to follow in their footsteps — literally and otherwise.

Another area of concern is the security of European nations. Opponents of an open-arm policy fear that with virtually no background checks, every refugee is a potential security threat to the host countries. Islamic terrorism, in particular, is a common pretext for rejecting refugees, given the fact that the Middle East has been the birthplace of the ISIS and Al-Qaeda.

On the other hand, human rights activists maintain that European countries must open their borders to the refugees. They argue that these people are not immigrants looking for better standards of living or educational opportunities for their children in a developed country. As a matter of fact, their country is crippled by war, and dapoxetine buy Malaysia they are running for their lives. If turned down by theses counties, they are destined to die as they have nowhere else to go. What is more, they do not expect permanent residency in Europe; all they are looking for now is a temporary sanctuary until the war ends and they can return to their home countries without the nightmare of persecution.

To sum up, granted, refugees are stranded and it is, without a doubt, everyone’s duty to help them, but I believe it is totally unfair to pressure European countries to host them and pay the price of yet another Middle East war. As far as I am concerned, the international community ought to contribute as this is a global crisis that has to be resolved at a global level.