Ever heard of “connotation”? 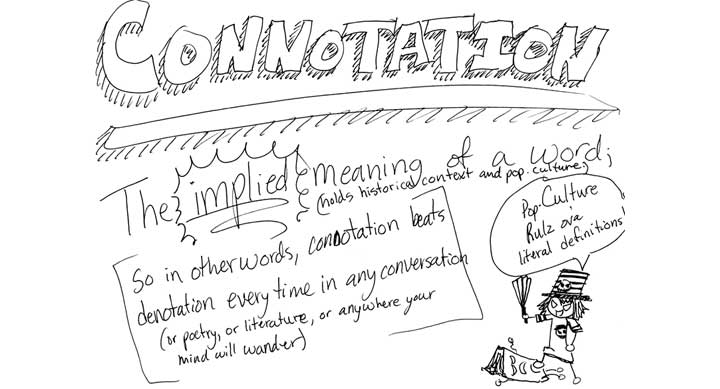 The hidden meaning behind some words

You go to the gym every day; you have lost many kilos. Are you thin now? or slim? Although they both mean “not fat”, thinness carries connotations of weakness, weightlessness and emptiness: This extra and rather hidden meaning is called Connotation.

What exactly is “connotation”?

English learners care so much about the literal meaning of a word that they don’t see this other layer! Linguistically speaking, “connotation” of a word is a quality or an idea that a word makes you think of that is more than its basic meaning. In our example above “thin” has a rather negative connotation (weak) while “slim” has a positive one (fit).

Another example would be countries or nations that are poor and do not have much industry. They used to be referred to as “Third World” counties, but this term is out of fashion today. It is considered, by many, to be politically incorrect and insensitive, insulting less fortunate nations by segregating them into their own “world”. The popular term, these days, is “developing” countries. Much more hopeful-sounding, isn’t it?

Leaders of Third World countries from around the world met in Indonesia to devise ways to improve their economies.

Leaders of developing countries from around the world met in Indonesia to devise ways to improve their economies.

Why should I learn connotations, anyway?

In IELTS speaking and writing modules, your choice of word must be accurate. If you use a word with a negative connotation insead of a positive one -or vice versa – your English may sound vague or confusing to buy uti antibiotics online the listener/reader. Those IELTS candidates who are aiming for an 8.0 or 9.0, especially, have to take connotations more seriously.

Also, in your everyday English, a desire for more positive connotations, or fewer negative ones, is one of the main reasons for using euphemisms.

How do I make sure about a word’s connotation?

Again, dictionaries can save you! If a word has a label like “offensive”, “disapproving”, “derogatory” or “pejorative”, it means it has a negative connotation and should be employed with caution!