In IELTS Academic Writing Task 1, you might be asked to write a report based on a flowchart – a diagram by which a process is shown. Here’s a model writing answer originally from IELTS Juice on the process of making orange juice. This week’s lesson has been prepared in reply to Fatima’s comment and request.

You should spend about 20 minutes on this task.

The diagram below shows the stages used in orange juice production.

Summarize the information by selecting and reporting the main features, and make comparisons where relevant. 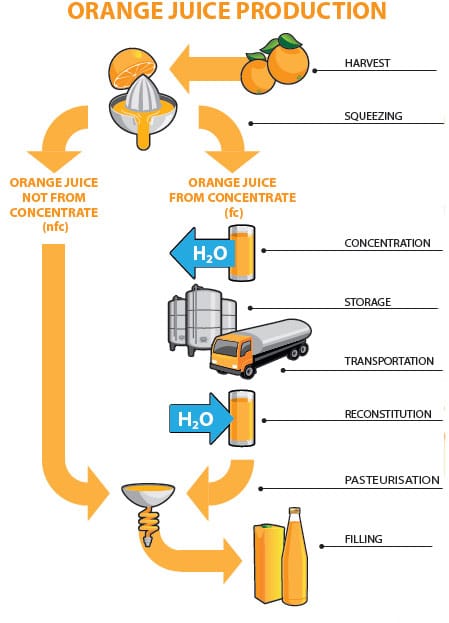 The diagram illustrates the process in which orange juice is produced. Clearly, this juice can be obtained using two different ways.

First, the fruit is harvested and squeezed so that the juice is extracted. Then at this stage, the juice which is from concentrate (or FC for short) is separated from the other kind which is not (NFC). NFC goes directly to the Pasteurization stage where bottles are filled with pasteurized juice whereas FC enters a more complicated process.

To begin with, the concentrate loses its water during Concentration and then stored in huge silos. Later, the contents of these silos are transported to enter the Reconstitution stage where water is added. During the final stage for FC, the liquid is pasteurized and mixed with NFC. Finally, the mixed juice is poured into bottles (Filling stage).